This is my first real painting

Up until now I have been doing what I've come to understand as Alla Prima work. This is work done in one sitting. I don't think they are considered "real" paintings. Mine certainly weren't.

There is a building at the end of my street on the corner of Route 1 and Leach street. I have no idea why I am abscessed with painting it but I've had this compulsion happen with pencil portraits of brothers, my first portraits. These were sketches as well. As far as I understand (from the internet) a real painting is sketched out and planned and done over a series of days. I have to say "but what do I know".

This painting did start with a draft sketch 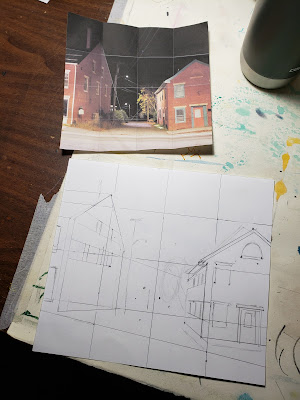 Then I transferred the sketch to an actual stretched canvas, 8 X 8 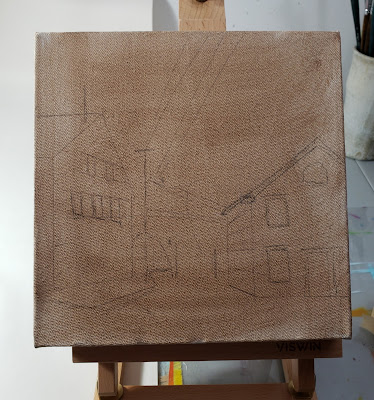 Then I made an underpainting "In my understanding" which is probably flawed, the underpainting gets the masses in place and "sets" the values. I viewed this using a notan app as well as plain black and white. I used Liquin to get the paint to dry more quickly.
Next day it was actually dry and I was amazed. I repainted it in more detail, correcting the color and adding the "entertainment" as a painting teacher described it. Now all that is left is for this paint without Liquin to dry so I can add the wash of white/light to the two streetlights. 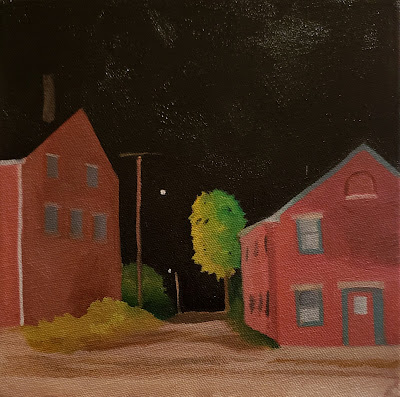 Is this amazing...no. Is it a good start, yes. I have to remember that I won't be a competent painter over night. I was comforted by a very successful artist I follow who said we will never get "there" because there is no "there". It's just a matter of getting better, or at least working toward that goal daily...hence, Daily Painting.

Posted by Beth Berman Beth
Email ThisBlogThis!Share to TwitterShare to FacebookShare to Pinterest

Please leave a comment. It's great to know people are looking!

I have recently started oil painting and I am using this format to both share my work with others as well as keep a record of my travels down the path. Here are some of the paintings, or should I say oil sketches that I have worked on. I am doing a daily painting just because I want to paint but also learn about color mixing, how the paint feels and behaves and to gain some skill in representing people places and things in oils and pencil sketches.